If you have ever seen the show “The Walking Dead” you will know what I mean. My wife thinks I am nuts, but I truly have some weird fascination with this vacuum. I figured I would take a break from photography for a night and talk about this kick ass filth sucking machine. Like a dust eating Walker, this thing looks like it has been through an apocalypse. 10 years, 2 homes, 2 kids, 3 cats, and a dog. Despite that torture, this beast keeps on rolling. With its fierce cyclone sucking action it kills dust bunnies without even remotely feeling bad. It has no remorse.

Look at this thing. This is the Charlton Heston of vacuums. See that? Yea, that’s duct tape. Despite its hot pink color, it serves to secure the entire handle assembly to the base. Why? Because that’s how this vacuum rolls. Like a weary-eyed sailor on shore leave looking for his next tattoo. It also serves as a reminder of the night this vacuum and I had a little scuffle. Somehow it got tossed across the kitchen and yet it continued to finish the job. We won’t talk about that. 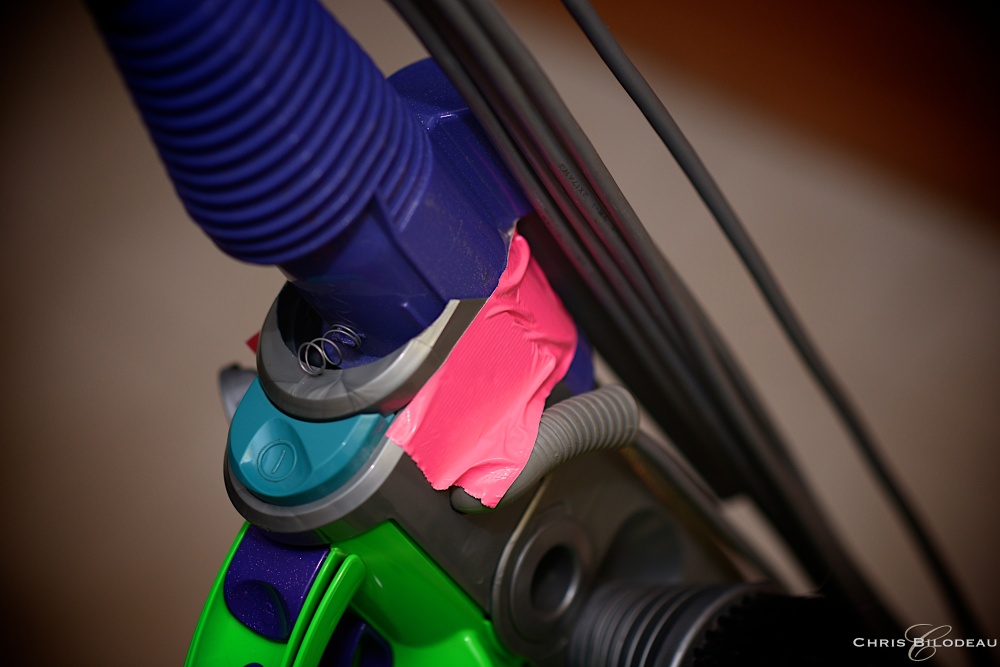 It never cries. It never whines. It never feels pain. It has been 10 years. I tried to buy another vacuum a few years ago, but it embarrassed itself trying to keep up. It ended up in the trash within a year.

So I finally decided to wash the pre-filter for the first time this week. Dyson recommends you do this every few months, but I waited 10 years. Why? Cause that’s just how we roll.

This thing smells. It has sucked dust, water, puke, kitty litter, hair, food, gum, a few barbie accessories, and a bunch of other highly un-recommended objects. Why? Cause why not? The smell of burnt something mixed with litter has sort of gone away, and that is a shame because it makes me think it might be getting a little soft.

Oh, the tubing is also torn and its also held together with duct tape…not pink, but gray. If you extend the tubing too far it begins to rip even more. But, it still sucks. Every single piece of plastic has been clogged and beaten at some point, but it still sucks. It’s on its second plastic dust chamber because the first one broke off after a fall. It still sucks. Oh, and that chamber is supposed to be turquoise, but Dyson sent me the wrong color. Nothing really matches any more and there are more scratches on this thing than a cat’s post. It has deep gouges and irremovable hair wrapped around the belt drive thingy near the brushes…but it still sucks.

Look at this thing. It is a mess. It has been through hell. It is severely abused, but 10 years of dust warfare and it smiles as we enter its 2nd decade of service.

I gotta hand it to Dyson. They make a heck of a vacuum.